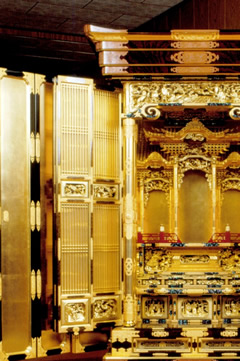 During the 17th century, a number of artisans, including carpenters, sculptors and lacquerers, came from all over the country to Nagaoka to build temples and shrines in and around the city. During the cold winter months, these artisans began producing household Buddhist altars.
Then, during the first half of the 19th century, the Nagaoka clan gave its official patronage to the Shin school of Buddhism. As a result, the demand for household altars increased as the worship of Buddhist mortuary tablets took hold, and homes throughout the fief were furnished with them. This increase in demand led to the establishment of a production center in the area.

The upper cabinet and lower stand of Nagaoka household altars can be separated, making it possible to periodically reapply coatings of lacquer to the surface. The three roofs on the inner part of the altar (kuden) is a noteworthy feature, as is the combination of traditional Chinese-style and more contemporary gables with a rising profile above either side.

Nagaoka household altars are built with a base and an inner kuden palace that can be separated, allowing them to be reborn with fresh lacquering even after 30 or 100 years. A key feature is their kuden palace, which has a unique three-roof design. The roofs are arranged in a traditional design with a large central pointed roof with cusped gables, and a smaller gently curving cusped gable roof on either side of the central roof.

The construction of a household Buddhist altar comprises five stages: assembling the wooden base, carving the wooden sculptured decorations, making the gold finishings, lacquering, applying the gold dust and gold leaf, and painting the maki-e gold lacquer paintings. Each stage of the process is handled by a different master craftsman specialized in the demanding techniques required.