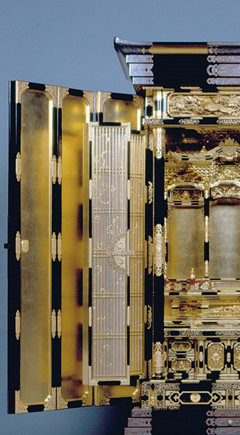 The area known as Sanjo has always been strongly associated with Buddhism, sometimes known as the ""capital"" of the faith. This is partly evidenced by the building during the 18th century of the Hokuriku region's finest piece of temple architecture.
Directly associated with the head temple in Kyoto, it is little wonder that many fine carpenters, cabinet makers, and decorative craftsmen came from the old capital for the erection of this monastic edifice and instructed the many local craftsmen who were also involved. As the numbers of believers in Jodo Shinshu centered on this temple increased, the making of household altars in the area also rose and it was developments at this time which still stand as the foundations of today's production center.

The orthodox inner sanctuary is constructed faithfully modeling real temple architecture, and the reputation of these household altars with their fine lacquer work, gilding and superb fittings is well established.

First the base of the altar is assembled using mortise and tenon joining, and the wooden sculptured decorations carved. After the base is assembled, it is then disassembled and each piece is coated and lacquered individually, and allowed to dry. After the pieces have dried, gold powder and leaf are applied, Maki-e is painted, gold finishings are attached and then the altar is reassembled to complete the process.