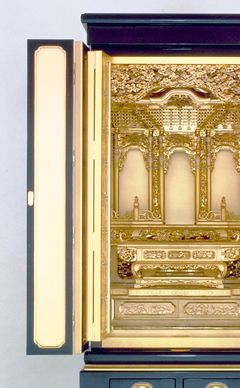 Household Buddhist altars and other items associated with the religion were first made in Osaka by specialists who came from Paekche on the Korean peninsular, at the time that Shotoku Taishi built the Shiteno-ji temple in the late 6th century.
Subsequently, the skills and techniques developed in Osaka spread throughout the area. The original form of household Buddhist altar was developed by a woodworker who was a specialist carver of images of Buddha. He conceived the altar as a moveable item with bracketing, doors and screens, a form which is still being made.

Household Buddhist altars to suit the idiosyncrasies of each Buddhist sect are on offer. Care is taken to see that the wooden structure of the interior is not damaged by the fittings. The gilded columns and carving are exceptional and are of a beautiful hue. One thing particularly special to Osaka Butsudan is the way in which a style appropriate to each sect is achieved with the decorative fittings on the doors.

Osaka butsudan comes in different shapes according to which Buddhist sect they are meant for. Also, by ingeniously using the taka-maki-e technique for making raised gilt lacquer works, the metal brackets are made to look as if they were nailed, thus preventing the brackets from damaging the wooden base. An elegant color finish is then applied to the surface of the statues and to the gilded pillars. Another distinctive feature is that the decorative metal brackets (hasso) on the front door reflect the differences between the various Buddhist sects.

Osaka butsudan is made from pine, cedar and cypress woods to which lacquer and gold leaf are applied; they are completed in the course of 11 stages which are entrusted to different craftsmen. The wooden base, Kuden, the Shumidan (dais for Buddhist images) and all ornamental fittings reflect the differences between the various Buddhist sects.