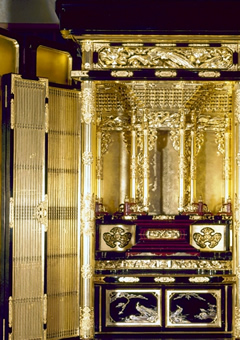 At the beginning of the Kamakura period (1185-1333) the Kawanabe area was noted for its connections with Buddhism. Kawanabe, a local powerful family who held sway over the southern part of what is now Kagoshima Prefecture, and the remains of Heike family, who were defeated at Dannoura, began holding memorial services and preaching the word of Buddha along a ravine of clear water in Kawanabe-cho.
Many monuments, tombs and Sanscrit engravings said to have been made by them still remain on the 500 meter high wall of rock there. Then in 1200, Hoko-in, a temple dedicated to the supreme enlightenment of Kawanabe, was built and this furthered the popularity of Buddhism even more. It is thought that the skills and techniques used in the making of Kawanabe Butsudan became established as a result of local circumstances.

These altars represent a confluence of the work of craftsmen from seven different areas of work: initial woodwork, construction of the inner sanctuary, various pieces of carving, making of the fittings, maki-e gold and silver decorative lacquer work, flat lacquer work and finishing. Their craftsmanship vindicated, these altars are well made in every detail, strong and reasonably priced.

A wooden base is created from Cedar, Pine, etc. The base is painted black with natural lacquer and finished with pure gold leaf and powder. Wooden base crafting, Kuden crafting, sculpturing, foundation painting, lacquering, leaf stamping, metal fitting and assembly is done accordingly to complete an altar.