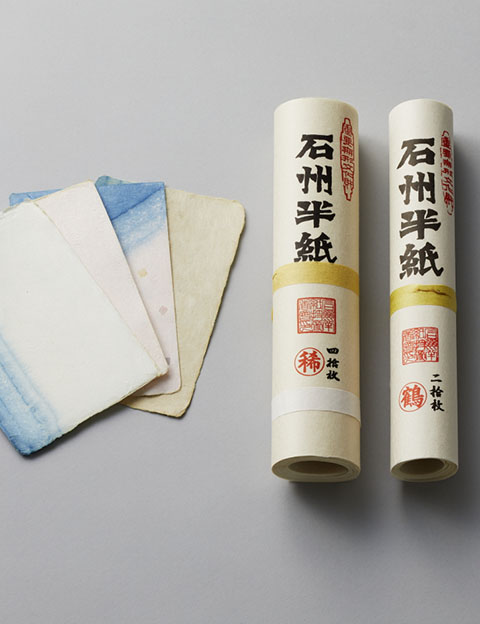 Sekishu paper is mentioned in the Engishiki, a Heian era (794-1185) document on court protocol, as well as the Kamisuki Chohoki, a manual on papermaking published in 1798, in which it is explained that the protector of Iwami Province taught the local people how to make paper.
Sekishu washi paper has been made without interruption for nearly 1,300 years. At first, it was made by farmers in their spare time but later became the work of specialized artisans. Today, the paper is produced using the same traditional skills and techniques as in the past.

Handmade paper differs slightly according to the plant fiber used. The long fibers of the paper mulberry (kozo) tree produce strong and supple paper. Paper made from mitsumata is taut and lustrous. Gampi paper is glossy, incredibly pliant and insect-resistant. Produced in large quantities, kozo paper was used in the past for ledgers by merchants who would throw them down their wells if a fire broke out because they knew the paper was strong enough to withstand a dousing. Items produced today include paper for shoji screens, calligraphy, stationery and business cards.

Kozo paper is extremely durable thanks to its long fibers and was once used by merchants for their account books because in the event of a fire it could be thrown into water without being damaged. Mitsumata paper is resilient yet delicate and has a soft luster. Gampi paper is even more delicate, has a glossy appearance and is resistant to insect damage.

First, the bast fiber from paper mulberry, mitsumata or gampi is mixed with soda ash and boiled. A starchy substance from sunset hibiscus (tororo aoi) is added to the water containing the fibers to make it extra viscous. The paper is made using the nagashi-zuki technique, in which bamboo-net tools called takesu and kayasu are used to stir the paper solution. Finally, the paper is dried in the sun or by using iron plates.