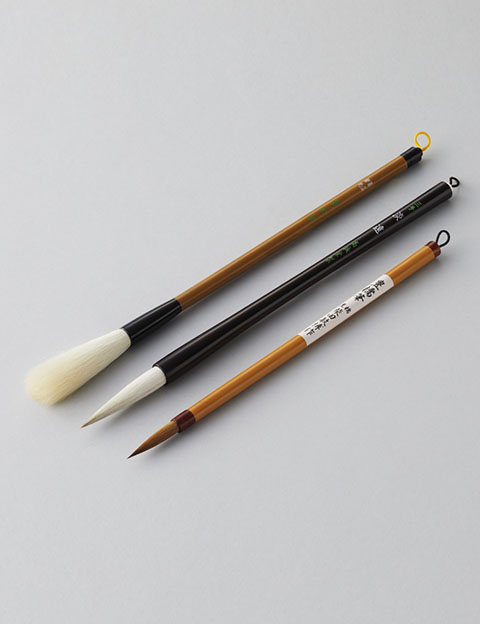 Toyohashi is located in an area once ruled by the Yoshida clan. Toward the end of the 18th century, the leader of the clan invited Suzuki Jinzaemon to come from Kyoto to make brushes for the clan. Over time, lower-ranking samurai began making brushes and this marked the true beginnings of the craft in Toyohashi.
Toward the end of the 19th century, Haga Jirokichi developed a coreless brush called a suihitsu, which is still being produced today. He was also instrumental in giving the craft a firm base in the area by establishing a scheme for training apprentices.

As a general writing brush, the market for Toyohashi brushes has been greatly affected by competition from cheaper brushes made in China. Consequently, a concerted effort is being made to produce brushes of the highest quality that appeal to the Japanese user in order to survive in a very competitive market. Today, various types of brushes, including those for calligraphy and painting, are diligently produced using traditional methods and techniques.

Most Toyohashi brushes are made for calligraphy. In recent years, cheaply-priced brushes from China have entered the market, dealing a blow to domestic producers. However, by producing brushes of the highest quality targeted at Japanese consumers, Toyohashi brush makers are able to hold their own against the competition.

The production process comprises 36 steps, including sorting the hairs for the brush tip, massaging the hairs to clean them in a technique called kemomi and using water to arrange the hairs in a characteristic technique called nerimaze. Once the hairs are arranged, the core is formed and wrapped in a layer of hairs (uwage) and attached to a shaft, which is then engraved. These high-quality handmade brushes are the result of traditional techniques and methods that have been handed down generation after generation.