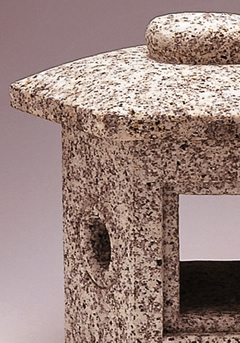 The origins of this craft can be traced to the latter part of the Muromachi era (1391-1573), but it was during the subsequent Momoyama era (1573-1600) that the lord of Okazaki castle invited skilled stonemasons from Kawachi and Izumi to build stone walls and a moat around the castle and to carry out some improvements to the surrounding town.
To hone their skills, these masons carved Kasuga and Yukimi style lanterns, which became the prototypes for Okazaki's own stone-carving craft.
By the beginning of the 19th century, there were 29 stone carving workshops, which rose to 50 by the end of the century. Before World War II, the town reached a peak of 350 workshops, a number that has since declined.

The majority of production comprises stone lanterns. Their simple beauty belies an intricate composition of lines and surfaces. The highly skilled decorative carving provides a delicate elegance. Other items produced today include miniature stone pagodas that can be used to hold water or plants.

Most Okazaki stone carvings are stone lanterns, which are characterized by the simple beauty of their straight and curved lines and the variety of faces created through their intersection. The advanced methods used for the decorative carving give the lanterns a delicacy and beauty.

The stone lanterns are made with Okazaki granite. First, chalk lines are drawn with a carpenter’s square to indicate where the design should be carved. Then, various tools, including a stone hammer, chisel and bush hammer, are used to carve the stone. Finally, the individual parts of the lantern—the base, pillar, support, light box, shade, and jewel—are stacked from the bottom up.