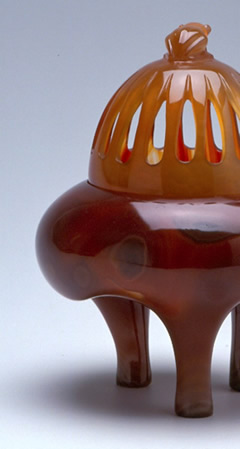 During the Nara era (710-794), a sea-faring people known as the Wanizoku came to Wakasa in what is now Fukui Prefecture and built a road in front of the area’s main shrine, where they began making agate objects. This is said to have been the origin of the Wakasa agate craft.
In the middle of the Edo era (1600-1868), a technique for enhancing the color of agate by applying heat was perfected, and by the 19th century, a range of cutting and shaping techniques were developed.

Agate is a semi-transparent type of quartz with markings similar to tree rings. The same people who noticed that agate turns a wonderful color when heated to 200-300°C perfected the firing techniques that are now unique to Wakasa agate work. A great deal of time is taken to cut and polish the extremely hard stone to create figurines of animals and the Buddha, as well as incense burners, sake cups and various ornaments.

Agate is a semi-transparent quartz with distinctive patterns that resemble tree rings. Wakasa’s unique tempering technique, in which agate is heated to 200–300°C, creates a beautiful amber hue. These exceptionally hard stones are carved and polished over time to produce figurines of animals and the Buddha as well as incense burners, goblets and ornaments.

The production process can be roughly divided into four stages: mining, tempering, sculpting/molding and polishing. The stones are cut in a way that enhances their individual characteristics and are then heated to bring out their color. Next, they are sculpted and polished using unique techniques to transform the precious stone into delicate and tasteful works of art.