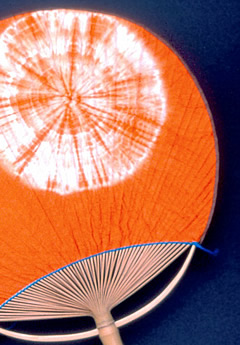 The production of uchiwa fans in the Kanto region began sometime during the Edo era (1600-1868). At the time, the province of Boshu in modern-day Chiba Prefecture was producing large quantities of bamboo, which is the raw material for uchiwa fans. The production of what came to be known as the Boshu fan started around the end of the 1870s, and by 1884, they were the biggest selling item produced in the province.
Today, Boshu fans are considered one of the top three uchiwa fans in the country, along with those from Kyoto and Marugame.
The ribs and bow of Boshu fans are made from high-quality medake and madake bamboo, respectively. Boshu fans are characterized by their round handles and robust arrangement of ribs, which gives them an elegance all their own.

The ribs are made by finely splitting a single narrow bamboo stem and spreading out the strands to form the desired shape. Then, Japanese washi paper, silk or cotton is attached, the edge is fashioned and the handle is painted.

The abundant supply of flexible, high-quality medake bamboo growing in Boshu Province provided a welcome source of income for the wives and daughters of local fishermen. Starting as a simple cottage industry, the production of Boshu fans has developed into a modern craft industry. The result of this highly skilled and delicate craft is a work of art that is both strong and beautiful to behold.

A single, round stem of medake bamboo is split to make the frame. Then, Japanese washi paper, silk or cotton is carefully spread over the ribs and glued. Next, the rim of the fan is fastened, and finally, the design is painted.