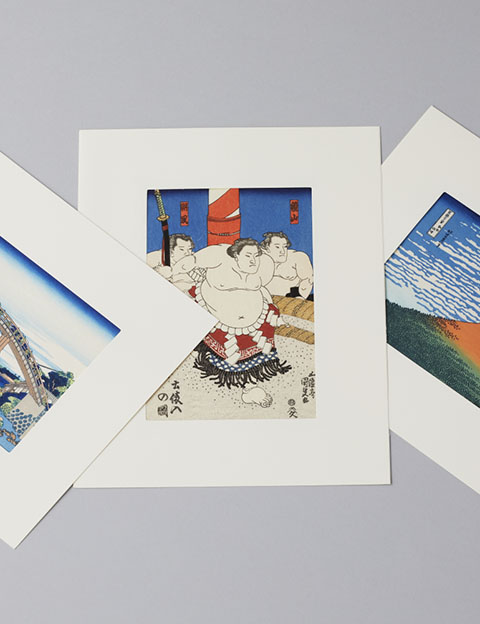 Edo woodblock prints began as simple black prints colored with a brush. These subsequently evolved into tan-e, beni-e, and urushi-e, eventually resulting in a printing technique in which colors were applied directly to the wood, followed by two- and three-color prints (benizuri-e). In 1765, it became possible to print intermediate colors as well as gold and silver, opening the door to multicolor prints.
The techniques developed in in the Edo era (1600-1868) have continued to be refined and remain in use today by artists working mainly in the Kanto region.

Edo woodblock prints traditionally reflected the lives and dreams of everyday people from the Edo era.

Because one set of woodblocks can produce several hundred copies, a characteristic of this art form is its capacity for small-scale mass production.

First, cherry wood is cut into blocks and the design is carved by a carving specialist. Then, a printing specialist applies ink to the woodcut, places a piece of handmade washi paper on it, and rubs the paper into the woodcut with a pad made of bamboo bark and leaves (baren).

Cuts that are too deep or too shallow can affect the printing process, and outside factors such as temperature and humidity must be accounted for by adjusting the amount of ink used. Carving and printing specialists with many years of experience must make fine adjustments to achieve the desired outcome, which is why this art form can never be automated. Some designs combine more than 30 woodcuts to create a single print, requiring extremely delicate handiwork.