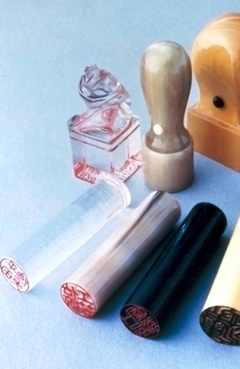 The earliest record of Koshu seals is a late Edo-era (1600-1868) shopping guide for Kofu, that lists wooden seals produced by skilled craftsmen.
Another document from the same period records an order for various materials, including water buffalo horn and a rare type of quartz containing grass, needed to make seals. These documents indicate that many types of seals were already being produced in Kofu during the second half of the 19th century.

Unrivaled elsewhere in Japan, Koshu seals are characterized by the use of carefully prepared materials, including quartz, boxwood and water buffalo horn, as well as the high degree of skill employed in carving the kanji characters. The artisans, working in tandem with marketing specialists based in Yamanashi Prefecture, produce these exquisite seals using techniques passed down from generation to generation.

Koshu seals were originally fashioned from crystal, using traditional techniques developed over many years. However, the range of materials used to produce these seals has expanded to include boxwood and water buffalo horn, which are unique to Yamanashi Prefecture. Combining craft techniques passed down through many generations with modern marketing operations, the Koshu seal craft continues to thrive today.

The production process involves numerous steps that vary slightly depending on the material. First, the surface is smoothed. After selecting the style, the kanji characters are first drawn on washi paper and then on the seal itself. Once the characters have been carved into the seal, they are smoothed, and any necessary adjustments are made after checking them with charcoal ink. Finally, the seal is polished. A variety of traditional hand tools are used, including a carving knife, seal engraving knife, round knife, flat knife, hand chisel, tapping mallet, carving stand and seal clamp. The delicate work of carving the characters into the seal by hand and adjusting them until they are perfect results in a one-of-a-kind seal every time.