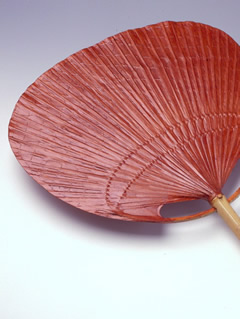 Marugame uchiwa fans can be traced back to fans decorated with a round gold seal that were devised as souvenirs for pilgrims visiting Konpira Shrine in Shikoku. During the 18th century, the Marugame clan assigned their warriors to make uchiwa fans part-time and this became the foundation of today's craft. At present, around 90% of all uchiwa fans made in Japan are produced in the Marugame area.

Marugame uchiwa fans are characterized by their construction from a single piece of bamboo, which is fashioned into both the ribs and the handle.

Marugame uchiwa fans are generally made from a single piece of bamboo that is split to form the ribs and the handle, which can be either round and flat.

First, madake or hachiku bamboo is whittled to make the ribs of the fan. Then, paper is carefully pasted onto the ribs. Persimmon juice and natural lacquer are sometimes used to color the fan.