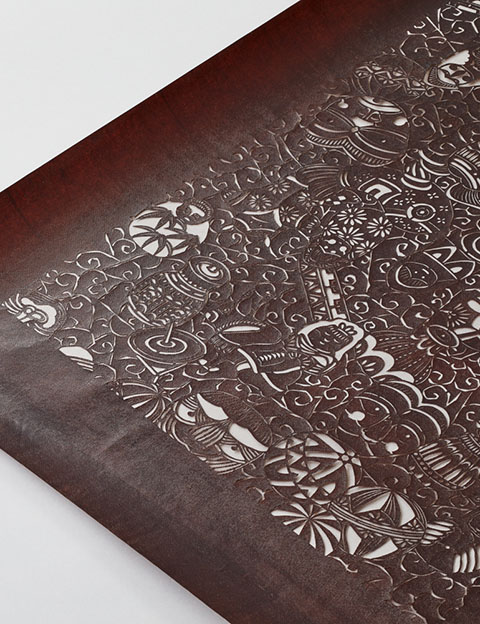 The history of Ise paper stencils can be traced to at least the end of the Muromachi era (1392-1573), when an artist named Kano Yoshinobu made a painting of a person using such a stencil.
During the Edo era (1600-1868), the production of Ise paper stencils developed with patronage from the Kishu clan.

Ise paper stencils have traditionally been used to create family crests and patterns when dyeing various kinds of kimono cloth, including yuzen, yukata and komon. Today, these stencils are sometimes used to make decorative objects in their own right.

Ise paper stencils are used to apply pictures and patterns when dyeing fabric for various kinds of kimono fabric, including yuzen, yukata and komon.

Ise paper stencils are produced using four methods. In hikibori, uniform striped patterns are created by using a ruler to guide the carving blade. In tsukibori, five to eight sheets of paper are placed on an anaban stand, which has a hole in the middle, and a blade is used to pierce the paper to create the pattern. In dogubori, the blade itself is shaped like a flower, fan, diamond, etc. and is used to create the stencil. In kiribori, various patterns, including same-komon, gyogi toshi, and arare, are created using a blade with a crescent-shaped tip.