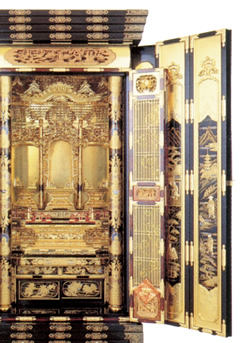 Nanao household Buddhist altars can be traced back to the early 17th century. Various terms associated with their production appear in documents dating from 1613 to 1703, including maki-e-dogu, kinpun and kirigane, all of which are associated with decorative lacquering techniques or gilding. There is also a reference to silver leaf in a document dated 1669.
In addition, there has been a district called Nushimachi (literally “lacquerers’ town”), in Nanao since the Edo era (1600-1868), so it can be assumed that a great number of lacquerers were operating there at the time. The oldest surviving Nanao household altar was made in the middle of the Edo era.

Nanao household altars are works of art that reflect the rich culture of the city they are produced in. Today, these beautifully made, long-lasting, warm yet majestic altars are still handmade by a small but dedicated group of artisans.

Nanao household altars are works of art that reflect the city’s long history and culture. Produced by the few remaining artisans who have mastered the required techniques, these handmade altars are robust, majestic objects possessing a special warmth.

Wood from ate and hiba trees harvested in nearby Noto is used as the raw material because it is long-lasting and has few defects. The products are reinforced with a special finish to withstand poor road conditions during transport. The body is tenon-assembled and coated with a premium rust-treated lacquer, and the metal fittings are made entirely by hand.