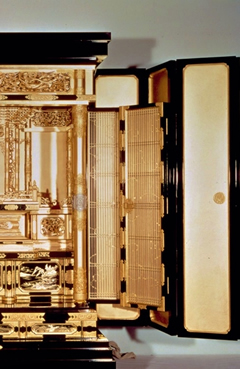 During the 18th century, highly skilled armorers, lacquerers and other artisans were encouraged by the Hikone clan to make household altars, leading to a local cottage industry. With the subsequent rise in popularity of Buddhism and the patronage of the Hikone clan, a production center was established, forming the foundations of the small craft industry as it exists today.

While the generally large Hikone household altars are grand and imposing, they retain a dignified air even when scaled down. Characterized by their functionality, they include a stationery box and a stand to store prayer implements.

Hikone household altars are generally large and always create an exquisite yet solemn atmosphere. However, even at a smaller scale, the altar never seems confined. The clever design includes convenient features such as cabinets and stands to store stationery, prayer implements and other accessories.

The production process consists of seven stages. 1. The base, comprising the body, ceiling and pillars, is made from cypress or cedar wood. 2. The shrine roof, which will be attached to the interior of the altar is built. 3. Decorative parts, including the transom, are carved. 4. The wooden base is coated with polishing powder, and the intermediate and top coatings of refined natural lacquer are applied, allowed to dry and then polished. Finally, a black polishing finishing (roiro-migaki) is applied. 5. Gold leaf is applied to the interior of the altar. 6. Brass and copper plates are engraved and plated in gold to create the metal fittings. 7. Maki-e designs consisting of gold- and silver-sprinkled lacquer and shells are applied to give the altar a luxurious air.