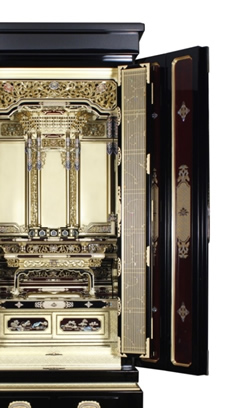 The Shin school of Buddhism has long been popular in Hiroshima. At the beginning of the 17th century, a number of artisans specializing in decorative fittings, braided cords and lacquer moved to Hiroshima from Kishu. The skills they passed on became the foundation of the Hiroshima household Buddhist altar craft.
However, it was not until the monk Tonko visited Osaka and Kyoto and returned with knowledge about making household altars and other Buddhist paraphernalia the production of household altars in Hiroshima began in earnest. Beginning in the Meiji era (1868-1912), altars were shipped to many parts of Japan via routes on the Inland Sea. The devastation that accompanied World War II brought production to a halt, but the traditions of the craft were revived after the war.

While the overall style is similar to those produced in Osaka, Hiroshima household altars are characterized by their use of oyster shells that have been crushed to a fine powder and mixed with lacquer. The top coat and the gilding are of equal refinement.

While the overall shape and design is similar to those produced in Osaka, Hiroshima household altars are characterized by their use of gofun chalk made from finely crushed local oyster shells as a base, as well as the “vertical” top-coating technique. In addition, the gold embossing techniques used are very advanced.

The manufacturing process is divided into base preparation, shrine making, sculpting, fashioning the ornamental fittings, lacquering and applying the gold-sprinkled lacquer designs. Groove-and-tenon dovetail joints are used to assemble prefabricated sets made of cedar, pine or cypress wood. The inner shrine is constructed using square framing, after which the base coat is applied, followed by intermediate and top coats and gold embossing. Finally, the altar is assembled from the individual components.